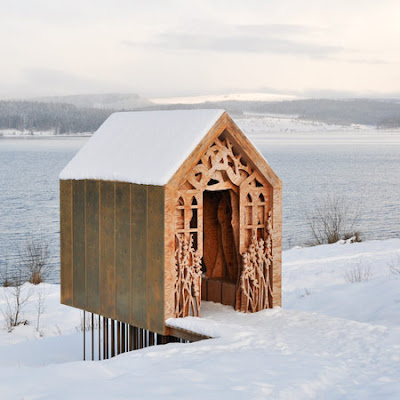 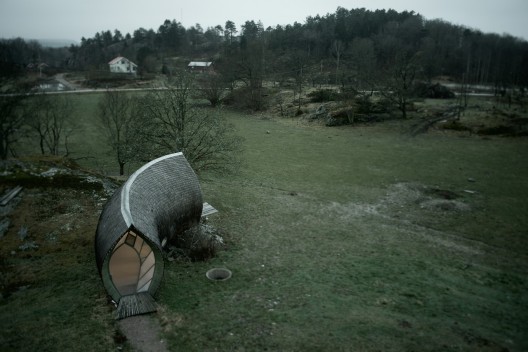 Hus 1 is an inspiring new house designed and built by Torsten Ottesjö. With double curved surfaces, compact and efficient planning it is a house on the human scale that blends effortlessly into the surrounding nature.

Situated in the unique cultural landscape of the Scandinavian West Coast, Hus 1 reflects and communicates with its surroundings. The natural materials used in the construction have made it a friendly place for both humans and nature for its whole life cycle.

The building was constructed on site. The idea was a house as personification – a structure designed to fit the needs of a two specific people. The majority of the furnishing is built into the house. The dwelling features convex walls which seam together with the floor creating both a sense of airiness and a naturally curved seating space along the sides of the interior. The structure is free-standing, so it can be moved anywhere; though the feeling is that it has actually sprouted out of the ground it rests on. 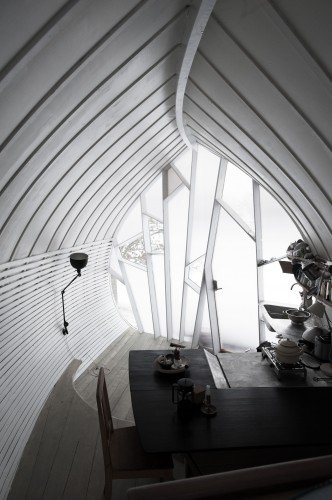 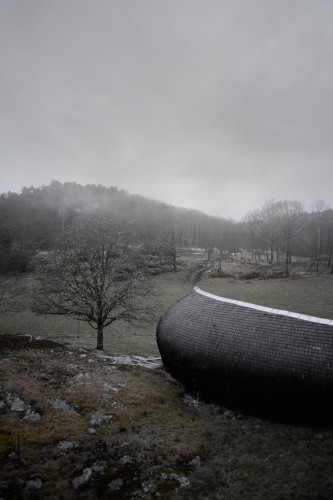 The 25 sqm house aims to provide a living space beyond understanding. It is supposed to fit, to enable – not to distract or cause attention. Torsten’s attention to the residents, the material, and the process itself means that that customization is implicit in the structure. The goal was to create a living space that blends effortlessly into its surroundings

Hus-1 is a house on the Swedish West coast, nestled in a valley far from urban linearity, it aims to provide an optimal living environment.

Hus-1 is a small house designed and built by Torsten Ottesjö. The building was constructed on site. The idea is a dwelling as personification. The dwelling features convex walls which seam together with the floor creating both a sense of airiness and a naturally curved seating space along the sides of the interior. The structure is free-standing, so it can be moved anywhere; though the feeling is that it has actually sprouted out of the ground it rests on.

The 25 sqm house aims to provide a living space beyond understanding. It is supposed to fit, to enable - not to distract or cause attention.

sometimes known as Kate, has worked as a naturalist, writer, and freelance artist for the past 30 years, and was staff naturalist and contributing editor for Country Living magazine for 11 years. She is a contributing editor to the Artist’s Magazine and Watercolor Magic and has had a regular column in Personal Journaling magazine, where she wrote on a subject she feels passionately about -- realizing the importance of creativity in our lives. She has written and illustrated -- her own work and that of others -- for a number of national magazines, including Science Digest, Harrowsmith Country Life, Sports Afield, Country Journal,Muzzlelader, Women's History, Early American Life, Sketchbook,Woodworker, Woman’s Day, Threads, Mother Earth News, National Wildlife Magazine, Sierra and additional magazines listed on the writerpage. Her writing and artwork has been included in a number of nature anthologies and art books.

She has written and illustrated 34 books of her own, and contributed to a number of others, working with a variety of national publishing houses. Those include North Light/F&W, Time/Life, Random House, Scholastic, Globe Pequot Press, Gibbs-Smith Publisher, Tehabi, Van Nostrand Reinhold, Walker Publications, Prentice-Hall Press, Penguin, Sierra Club, Stackpole and others. See book and magazine list. In 1993, she founded her own small publishing company, Graphics/Fine Arts Press, which primarily offers books of interest to the reenacting community or others interested in history and material culture. She published The Journal of the Middle Waters Frontier for five years; it focused on primary documentation about the lives of our forebears.

She is a longtime member of the Author’s Guild and the Costume Society of America. Chosen Conservation Communicator of the Year by the Burroughs Audubon Society in l987, and won the Thorpe Menn Award for Creative Writing (AAUW) for The Naturalist’s Cabin; Constructing the Dream (Viking Penguin) in 1992. A resident of Missouri all her life, she was born in Independence and has lived in the Excelsior Springs area since 1969.

Interests (more rightly considered obsessions) include travel, reading, Celtic myth and history, reenacting, pottery, jewelry design, and drawing and painting for the sheer enjoyment of it -- sort of a busman’s holiday...
And among those things that are most important in her life are nature and solitude, creativity, music, cats, family and friends, honesty, humor, and love. What else does one need? 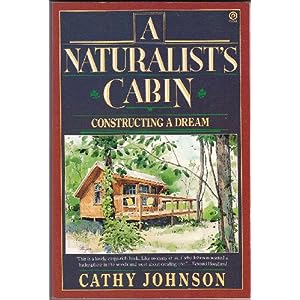 “A lifelong interest in the outdoors, in walking, drawing, making notes, playing with tadpoles and bugs made me long to be a naturalist when I grew up -- assuming that growing up will ever happen! Reading books by Henry David Thoreau, John Muir, John Burroughs, Sally Carrighar, Henry Beston, Ann Zwinger, Ed Abbey and many others only firmed my nebulous childhood dreams into a career choice. I have been blessed to spend these years wandering the outdoors, writing books and articles, making field sketches and paintings of what I found in nature. It is the best of both worlds -- doing what you love and earning a living from it.”

Her natural history books were On Becoming Lost; A Naturalist’s Search for Meaning, The Local Wilderness, The Nocturnal Naturalist,The Naturalist’s Path, and The Wild Foods Cookbook. Her writings have been included in many nature anthologies as well.

The cabin she built in the woods as a base camp from which to work was featured in her book, The Naturalist’s Cabin; Constructing a Dream, and in a number of magazine articles, includingCountry Living,Harrowsmith Country Life,and the Missouri Conservationist.

The land that surrounds the tiny cabin provided many hours of rambling, sketching and taking notes that eventually became One Square Mile; An Artist’s Journal of the American Heartland.

Johnson has taught independent painting and field sketching workshops coast to coast and given workshops on field sketching and painting for the Missouri Department of Conservation and the Martha Lafite Thompson Nature Sanctuary in Liberty, Missouri. She has designed trail signs for both those organizations, and is currently at work on a large commissioned portrait of their founder for the Nature Sanctuary.

Field sketch of Equisetum or horsetail, pencil, from The Naturalist's Path; Beginning The Study of Nature.

Green heron pen and ink appeared in one of Johnson's nature books on her jewelry. 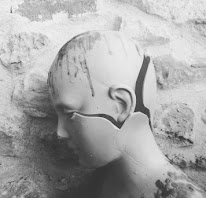 “Without great solitude no serious work is possible” (Picasso)

“Remain sitting at your table and listen. You need not even listen, simply wait, just learn to become quiet, and still, and solitary. The world will freely offer itself to you to be unmasked. It has no choice; it will roll in ecstasy at your feet.” (Franz Kafka) 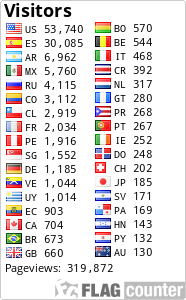